The presence of revolutionary leaders in Latin American culture is undeniable. As I travel through Central America I come across merchandise involving leaders such as Che Guevara and Sandino. Both are admired for their self-sacrifice and are considered martyrs of the people for fighting against the imperialism of the US government. Being from the United States, I find the effect of my country on others quite interesting. For years the United States government has been known for its economic imperialism. It is understandable why these revolutionary figures are viewed as heroes around the country because they represent justice and liberation for the people during times of great oppression.

Che has developed different personas over the past few decades that seem to portray him as black or white. Some claim that Che is a hypocritical bloodthirsty warrior, however, when I asked the people of Central America why Che is so admired, they just claim it’s because he was a “luchador”, a fighter for injustice and not much else. Surprisingly, it seemed as if many did not know much about Che. I have found a grayish area in my research, Che represented the people of Latin America and gave them a voice, fighting until the death to assist the poor and oppressed in rising up against imperialism and injustice. While his intentions were moral and just, it seems Che became lost in a world of violence and hatred. Ditching his medicine bag for ammunition (literally) he went down a bloody path he felt was necessary to achieve his mission. 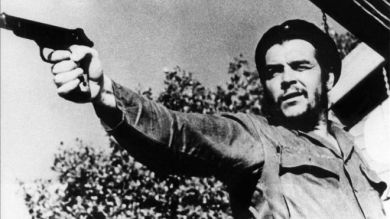 Sometimes on my travels, I find it quite embarrassing to be an American. The way many countries view Americans in a negative light and why makes me somewhat what cringe. Coming to Central America, many people that I have encountered have been helpful and kind. To know that we had our hand in their economic and political affairs, aiding corrupt government figures and creating agreements such as NAFTA that has had devastating effects on many Mexicans, is very disappointing. I can understand why people like Che, who stood up to this type of tyranny, would be admired. If the United States had to deal with other countries coming in and taking control of their political system, an uproar would quickly ensue.

The Cuban revolution and the defeat of the CIA invasion at Bay of the Pigs will always be a major historical event in Latin American history. It was the first time a Latin American country succeeded in an overthrow of a Pro-US dictatorship and keeping the US out as well.

Unfortunately, Che was also known to have been the overseer of a political prison in Cuba that incarcerated homosexuals, people with AIDS, and Catholics, who were seen as a threat to their revolutionary ideals. Many were executed during this time some by Che himself earning him the name “the butcher of La Cabana”. It seems these actions did not coincide with acts of justice and freedom he so greatly supported or with the image he carries around Latin America today. Che once stated that “Cruel leaders are replaced only to have new leaders turn cruel,” which ironically seemed to have happened to him. However, I have found that many people within Central America want to focus on the ideologies of Guevarism, the symbolism he carried as a fighter against imperialistic ideas and love for the common folk. This gives the people hope. In a capitalistic system, there will always be many who suffer as the rich get richer and the poor get poorer, deprivation of desperation lead revolution.

History is a very important part of a countries identity. When countries histories are intertwined, I think it is important to respect the other perspective. Revolution is a part of Latin American history and part of their present and future and is a major factor that remains and will remain a constant moving forward. I just wonder who the next great revolutionary figure will be? And may he, or she, die a hero before they see themselves become the enemy.